With their high school sophomore seasons behind them, many Louisville outside hitters have been focused on the 2020 club campaign.

Louisville is home to some of the state’s top young outside hitters and others that continue to develop.

Here are six Louisville sophomore outside hitters to watch.

Kayla Bryant: A 5-10 sophomore outside hitter/defensive specialist, Bryant is a student-athlete from Sacred Heart Academy. A consistent contributor both offensively and defensively for Sacred Heart, Bryant registered 179 kills, 196 digs and 53 services during the 2019 high school season. Bryant is competing for Union Asics 16-1.

Chloe Newton: A six foot outside hitter/opposite hitter, Newton is a student-athlete from Mercy Academy. As a sophomore, 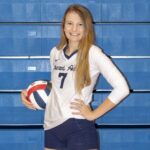 Tess Schrenger OH Sacred Heart | 2022 State KY : A six-foot sophomore outside hitter, Schrenger is a student-athlete from Sacred Heart Academy. A leader for her high school team, Schrenger recorded 324 kills and 168 kills during the 2019 prep season. An accomplished hitter early in her prep career, Schrenger is competing for KIVA 16 Red.