Adrienne has excelled at Union Catholic the past season being a setter in their 6-2 system compiling 310 assists and 106 digs. Having the ability to play libero as well it will be interesting to see how she is used the upcoming season at UC with the other half of the 6-2 (Abbey Ortiz) and senior standup libero (Najlaa Williams) graduating. No matter if she is setting or leading the defense at the libero position expect Adrienne to help UC look to repeat last season’s impressive 30-2 record.

Riley put up some serious numbers for Morris Catholic the past season totaling 429 assists, 204 digs, and 83 kills from her setter position.  She lead the Crusaders to a 15-12 record and a second-round appearance in the NJSIAA state tournament. Look for her to continue to build off of last season with a team that is returning most starters.

Sophia is looking to fill the shoes of Union Catholic graduating outsides Grace Kane and Liv Szyszkiewicz. Playing on 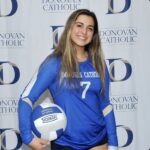 Karin Ojeda 5'5" | S Donovan Catholic | 2021 State NJ - Donovan Catholic Karin led Donovan Catholic to a historic season making it to the NJSIAA Semifinals. With an aggressive serve that totaled a second-best 99 aces and being one of the top in assists with 648, Karin has put her name quietly in the running for one of the best players in NJ. Losing the team leader in kills (Lauren Schnailey) she will look to others to put the ball away for the Griffins.   Brooke Askin Brooke Askin 5'11" | MB Pope John XXXIII | 2021 State NJ - Pope John Paul XXIII Look for this lengthy hitter to take on more responsibility for the Lions this upcoming season after graduating two all-state outsides. Primarily being used in the middle her junior season, Brooke has shown the ability to be a presence at the net totaling 63 kills and an impressive 40 blocks. She also added from the service line picking up 44 aces. Her connection with stand out setter Meaghan Lawrence will be vital for Pope John’s success.

Subscribe to Prep Dig New Jersey to get access to all premium articles and prospect rankings for as little as $2 per week with an annual subscription!