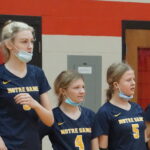 Middles are among the Kentucky high school volleyball players on the rise in the Class of 2023.

A look at three middles on the rise in the Prep Dig Kentucky Class of 2023 Rankings follows.