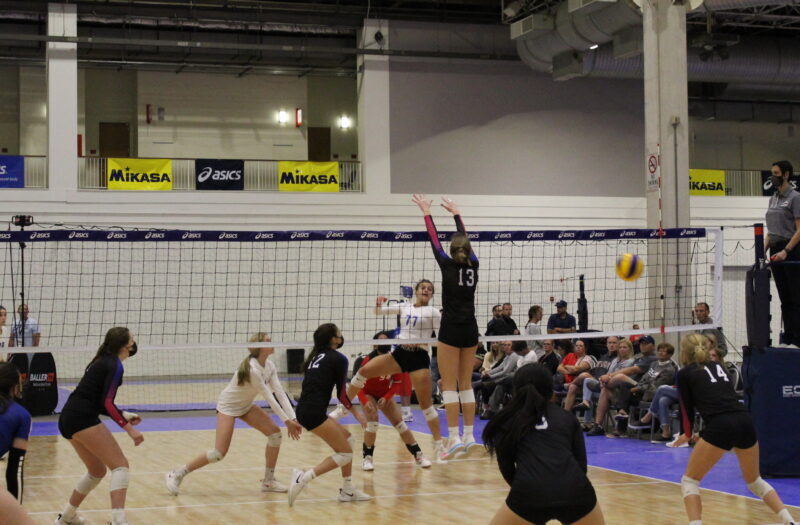 As the Asics Midwest National Championship has come to a close, I have had the chance to carefully watch and access some standout players that I had the honor of watching play this week.

I saw some great talent and these girls were definitely there to put their best foot forward in letting them know who they are up against.

Clifford played a very strong match, both days, and her athleticism definitely matched her hustle on the court. Clifford is for sure a stock rising player and on the rise to developing herself into a elite player. In her match against Lions 15 Sky, Clifford brought out her strong suit, which is her ability to have a strong swing and be able to recover from her own mistakes. This is something that I saw rare amongst the matches I watched. If Clifford hit a bad ball, she made sure she was in the position to recover the ball and get it over the net. She is fast and very consistent and that is impressive with someone her size. She was where she needed to be every time. She was there for the perfect set for a kill and when she needed to block an attempted kill, she made sure that she put up a sturdy wall. Clifford played an impressive match and caught my eye each time.

Cleary is another athlete of the Club 1 15 Royal team who should what they are capable of on the court. Cleary falls a bit on the shorter end when it comes to her height, but that did not stop her from defending the ball like no other. She is a fast responsive athlete and when it came to getting that ball back over and making sure that it did not hit on her side, she did exactly that. Cleary has a very special skill set and that is her ability to move freely across the back row, whilst defending the ball. She gets low and doesn’t mind having to dig deep into the ground to reflect the ball back into a live play.

Passarelli stood out to me as a developmental player and her skill set to being a solid setter. What stood out most was her ability to be consistent in making her own judgement to know how high to set the ball  that worked on the skill set for her other teammates. This stood out, because she knew how to properly read her teammates and read the court well in order to understand what worked best for the offensive situation. Passarelli has this talent and this is what is going to take a a long way in her career.

Fujita is a very fun player to watch. She moves quick along the net and she is a very powerful player that works well with her setter and knocks the ball of out the park anytime she is set up with a perfect set. The one thing that stood out to me about Fujita is her ability to get off the ground and use that to her advantage. She has a strong swing, she’s an aggressive attacker and that is what I like to see.

Flaharty caught my eye with her height and her ability to move. She works well at the net and is one of those athletes that you want to see at the net. But don’t let that fool you, she knows how to work her arm as well. Flaharty really stood out, because she is an talented athlete that has both the height and she has a strong and powerful swing. The combination between the two works well, because she doesn’t have to get off the ground so much, but it is imparative that she is consistent each time and that she is.

Thorne is another stand out athlete that caught my eye with some impressive movement on both the floor and her ability to work the net. Thorne is one of those athletes that is quite, but deadly. She sits quietly at the net, but the minute the ball moves, she moves and she moves quick. She snaps up and is strong on the defense, making sure that the ball doesn’t have the chance to make it over the net. Her swing is something else. She is a strong and powerful swinger, who will not let her teams down. Thorne stood out most, with her ball handling skills when it came to swinging on the ball. Thorne identified her target and was accurate every time.