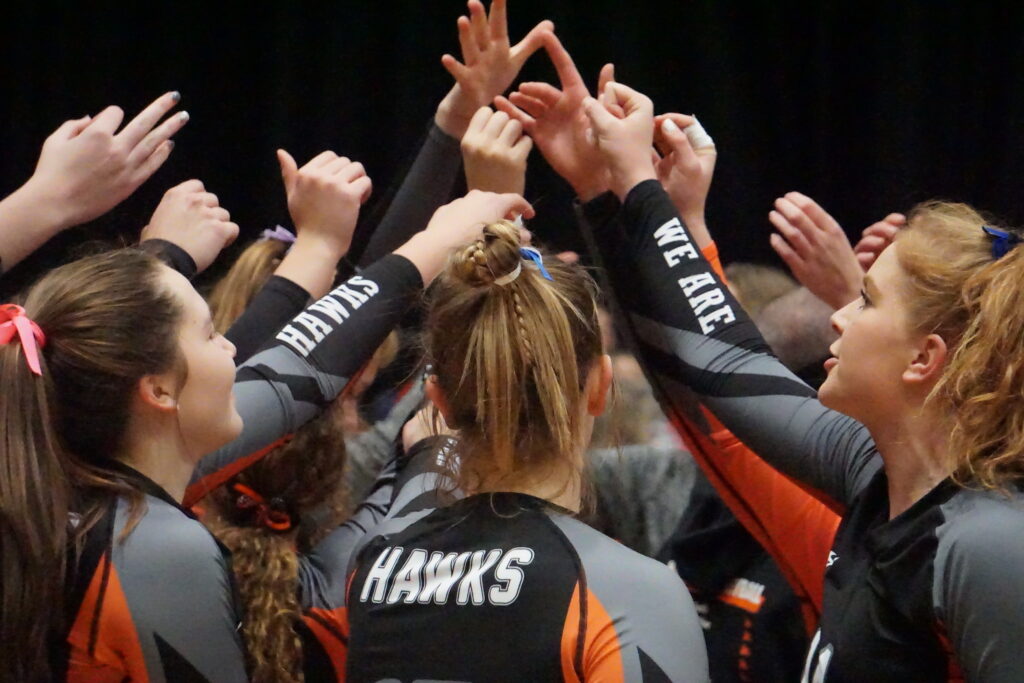 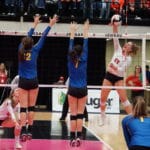 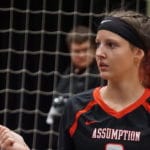 The matchups are locked in for Class 3A Regional Finals.  Plenty of names that are familiar when it comes down to the final 16, to then be down to a field of eight heading to the state tournament.  A battle of East vs. West with many teams out of the Northwest Corner and Eastern Teams, more notably the WAMAC who has plenty of teams in Class 2A-4A still alive in tournament play.  What’s the key in a regional final match?  Who gets settled into their game first and with getting settled in, who can serve receive? Points pile up quickly and the tempo of the game starts to really roll if teams are unable to put up a good pass to get into their offense.  Here is a quick look at each region with a prediction of who is heading to Cedar Rapids.

The matchups are locked in for Class 3A Regional Finals.  Plenty of names that are familiar when it comes down to the final 16, to then be down to a field of eight heading to the state tournament.  A battle of East vs. West with many teams out of the Northwest Corner and Eastern Teams, more notably the WAMAC who has plenty of teams in Class 2A-4A still alive in tournament play.  What’s the key in a regional final match?  Who gets settled into their game first and with getting settled in, who can serve receive? Points pile up quickly and the tempo of the game starts to really roll if teams are unable to put up a good pass to get into their offense.  Here is a quick look at each region with a prediction of who is heading to Cedar Rapids.    Region 1  SBL 2020 State Tournament Sergeant Bluff - Luton 29-6 vs. Sioux Center 25-8 @ Le Mars SBL has made it a tradition by playing in the regional final match and being on the floor of the US Cellular Center in Cedar Rapids with a state title in Class 4A in 2019.  They have plenty of experience at each touch.  Libero, Alivia Wolff has nearly 300 digs on the season and saw significant time as a DS in 2020.  Setter Maddie Hinkel Maddie Hinkel 5'10" | S Sergeant Bluff-Luton | 2022 State IA has 900 assists on the season and is a multi-sport star for the Warriors.  Middle blocker Emma Salker Emma Salker 6'0" | MB Sergeant Bluff-Luton | 2022 State IA is dominant offensively and defensively and will be key throughout the match, she is a Missouri Western State (NCAA D2) commit.  Sioux Center will rely heavily on Junior Regan Jansen who has done it all this season.  She has over 300 kills this season and is just under 200 digs.  Both of these teams have been through the gauntlet of playing the top teams in Northwest Iowa.  They did square off earlier this season with SBL winning 2-1 at a tournament at Unity Christian.  Who Wins?  SBL….it’s a long one.  This one could go five, and then some.    Region 2  Sheldon 26-2 vs. Forest City 19-12 @ Estherville-Lincoln Central  Sheldon has four attackers with over 100 kills and the top two have some pretty solid numbers with Payten Lode racking up over 300 kills where Claire Johnson Claire Johnson 5'10" | OH Sheldon | 2023 State IA has 282 kills and nealry 200 digs.  The Orabs also have a solid libero in Makenna Kleinhesselink.  Sheldon’s losses come to top teams in the Northwest Iowa and even teams out of Sioux Falls, SD.  Forest City is the runner up in the Top of Iowa West and will be bringing a team led by Shae Dillavou with nearly 250 kills on the season, a long line of Dillavou sisters who have been top players for the Indians.   Who Wins?  Sheldon is the next Northwest Iowa team to punch their ticket to the state tournament Unity vs. Assumption Region 3  Unity Christian 27-4 vs. Clarion-Goldfield-Dows 19-15 @ Storm Lake Unity and CGD both have state tournament experience.  However, CGD will not have Morgan Middleton

Morgan Middleton OH Clarion-Goldfield Dows | 2021 State IA (North Dakota State) and Jadyn Jondle Jadyn Jondle DS/L Clarion-Goldfield Dows | 2021 State IA (South Dakota) who were big time players the past three years for the Cowgirls.  Unity Christian will be led by Gracie Schoonhoven Gracie Schoonhoven 5'11" | OH Unity Christian | 2023 State IA , who has been a key part of multiple state tournament appearances for the Knights, as well as being a key piece to the Unity Christian state champion basketball team last March.  CGD will rely heavily on Junior, Lexie Lane who has over 300 kills on the season for the Cowgirls.  CGD is battle tested playing against some of the state’s top teams.  Who Wins?  Unity Christian has the length, athleticism, and experience to secure another spot in the state tournament.    Region 4 Des Moines Christian 35-6 vs. Nevada 21-21 This is a really interesting matchup.  DMC has been a top ten team all year and Nevada is playing with the hot hand this post season.  Des Moines Christian has five attackers with more than 100 kills and three with over 200 kills with Emma Cross Emma Cross 5'10" | OH Des Moines Christian | 2022 State IA , Allie Lundberg, and Gabby Lombardi.  Cross is a Gardner-Webb (NCAA D1 commit) and has been a powerful player for the Lions.  DMC has four losses in October which are all to top Northwest Iowa teams in Western Christian x2, SBL, and Unity.  Nevada has played in top tournaments all season long, they’ve seen what the state’s best look like.  The Cubs are led by a Sophomore running the show in Mady Gibson who dishes to Senior attackers Mayzi Weig and Shelbi Hazlitt.  DMC defeated Nevada at a tournament in Mount Vernon at the beginning of the year 2-1.  Who Wins?  This is a tough one.  Nevada is the Cinderella squad and if they can win the first set, I’m leaning towards the Cubs.  If Des Moines Christian can win set, one...I’m picking the Lions to go to Cedar Rapids.   Region 5  Mount Vernon 33-12 vs. Eddyville-Blakesburg-Fremont 31-4 @ Williamsburg  Mount Vernon is going to see a healthy dose of one of the top freshmen in the state with Molly Shafer who has over 500 kills.  She’s taken over 1000 swings on the year and will be set anywhere in the front and back row.  Mount Vernon has depth and plenty of weapons of their own.  Another top Freshman on their side of the net will be Chloe Meester who has nearly 400 kills.  Their first two contacts are real consistent with libero, Kameron Brand and setter, Madeleine Miller, a New Mexico commit.   Who Wins?  Tough to go against Mount Vernon.  Mustangs are heading back to the Cell.    [player_tooltip player_id="17323" first="Macy" last="Daufeldt"] Region 6 West Liberty 36-4 vs. West Burlington 30-3 @ Mediapolis The Junior class will be in full force for West Burlington with their Junior setter, Abbey Bence looking to dish to her classmates with Sophia Armstrong Sophia Armstrong 6'0" | RS West Burlington | 2023 State IA and Kenna Marlow.  West Liberty will come in extremely hungry to this match.  After making the 2019 state tournament, the Comets were knocked out by Davenport Assumption in the regional final in 2020.  Senior Macy Daufeldt

Macy Daufeldt 5'10" | OH West Liberty | 2022 State IA , who has over 1500 kills and 1000 digs, will play college volleyball at Drake.  She is one of the top all around athletes in Iowa.  The Comets have a consistent touch where it starts with libero, Monica Morales Monica Morales 5'4" | DS/L West Liberty | 2023 State IA and setter, Brooklyn Buysse Brooklyn Buysse 5'7" | S West Liberty | 2023 State IA .  Who Wins?  Daufeldt has a big night, Comets go back to state.    Region 7 Assumption 33-4 vs. Independence 29-12 @ Washington  Assumption has been to the state tournament the past three seasons and will look to make their fourth consecutive state tournament.  Ava Schubert

Ava Schubert 6'1" | RS Assumption | 2023 State IA is one of the top right sides in the Class of 2023 with a big left handed swing.  They are a heavy favorite with their athleticism and experience.  However, Independence has had a strong season and is accustomed to playing against top teams in the state, especially in a best three out of five format being part of the WAMAC.  Senior, Alexis Hearn has over 300 kills and is followed by four others with over 100 kills.   Who Wins?  Call me crazy, but I’m going with the Mustangs.  With a balanced lineup of Seniors who have been playing tough matches all season, it might just be enough to over take Assumption.    Region 8  West Delaware 39-5 vs. Vinton-Shellsburg 19-12 The tempo West Delaware runs is tough to stop.  Their middle attackers are swinging as the setter is releasing the ball.  If they can pass, it makes it extremely tough to defend.  West Delaware has a solid first contact with Senior libero Ella Koloc