Defending district champions from around the state will be looking to remain on top during the 2020 high school volleyball season. 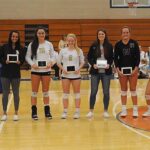